*October is Depression Awareness Month. I have mentioned that one of the things which drew me to wholesome foods was the potential healing properties they offer. I eliminated the processed, chemically laden items in my pantry, replacing them with grass-fed meats, pastured eggs, organic, responsibly grown fruits and vegetables.  But sometimes food isn’t the whole answer. Sometimes it’s only a small part. This was the case for me with Depression. The following is something I wrote some time ago but have not had the courage to post. But this is such an important issue and keeping quiet does nothing to bring change. And change is desperately needed. 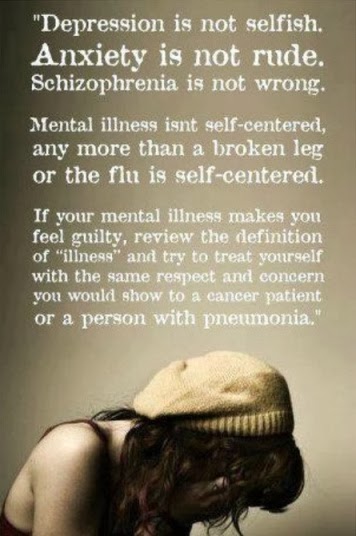 If I am having a heart attack and doubled over in pain, what would you suggest I do? Would you help me? If so, how? Perhaps you’d call 9-1-1 or rush me to the hospital. I might need a dose of aspirin or even nitroglycerin under the tongue…a stent…bypass surgery…at the very least I would need to see a doctor.

What if I had diabetes? You might suggest changing my diet, watching my sugar intake. I might need insulin or some other medicine to help keep it under control. You might even be willing to give me an insulin shot should I find myself heading into a diabetic coma.

Would you – seeing me in such dire need – suggest that I “think positive thoughts,” or “keep active, it’ll pass”? Would you say, “Think about how much you have to be thankful for”? Will those suggestions change my situation?

So why do we condemn those suffering from Depression to such nonsense? Thinking positive thoughts does NOT keep Depression at bay. I am living proof of that. Depression is an illness. It is medical. It is NOT a weakness. Some of the strongest people I know fight a constant battle with Depression.

I fight a constant battle with Depression.

It can be difficult to explain how debilitating this disease is. It doesn’t present itself in obvious ways like many other diseases do. Sometimes it sneaks up on you without warning; other times it slowly creeps into your being, sometimes so slowly you don’t even realize what is happening.

It does not discriminate. Old, Young, Privileged, Impoverished…everyone in between: it can show up in any of us. It can be humbling. It can bring you to your knees.

It often brings me to my knees.

When it hits me my world closes in. There are no silver linings to the clouds that hover inside my head, no matter how much positivity I attempt to conjure. Which isn’t much considering I have little energy to conjure anything.

It’s this physical side to Depression which can be difficult to understand if you’ve never experienced it. It’s suffocating. Like the Dementors from Harry Potter have swooped in and are sucking the life out of me. I cannot breathe. I am paralyzed. Unable to turn to others for help. Oh, there is certainly a desire to get help, yet at the same time I have this fear of dragging others in with me, of somehow turning into their Dementor. I do not want to suck anyone into my Hell.

Beyond not wanting to drag others in with me, there is a strong desire to keep it hidden. There is a stigma attached to Depression that it is ‘all in our heads’. It’s a weakness. We create it.

Depression is an illness. It may not be physically obvious like other diseases. But – invisible or not – it is an illness nonetheless.

Hard to say if I was born with Depression, but it reared its ugly head by my teen years, possibly even earlier were I to take a thorough peek at my childhood. Depression struck me particularly hard after the birth of my first child. I was tired, he was colicky. I didn’t eat well, neither of us slept well. In the span of less than a year I had: graduated college, moved to a new state, built a house, planned a wedding, began working, got pregnant, got married, and finally, quit my job to stay home with our son as a full-time mom.

And I was lucky.

This is what everyone told me. And it’s true. I was fortunate. But I was also Depressed. I was exhausted. Money was tight, my house was a mess…I was overwhelmed. Shame hit me hard:  Shame that I could not keep our beautiful, fortunate life in the manner in which it so desperately deserved to be kept; Shame that I could not take care of my husband and newborn son the way they so deserved to be taken care of. I felt ashamed that no matter how hard I tried it was not enough. I was not enough.

At that time I had not yet heard of Postpartum Depression; I didn’t know much about Depression at all. It never occurred to me that this was some sort of illness. I thought I was a failure. I hid how desperately out of control I felt. Shame reared its ugly head every day (Shame: my new best friend!). I was convinced I was inadequate. I was ‘supposed’ to feel grateful and happy. Oh, certainly I was grateful. I had so much. Yet believing I was weak made me feel as if I did not deserve any of it. I was living a lie. I was not worthy.

Reading Parent’s Magazine one day, I came across an article on Depression. I recognized myself in every word. This was the beginning of me seeking help; the start of many attempts to find ‘The Answer’.

I began to talk to my friends a little about what I was experiencing. Many offered advice and helpful hints. I heard comments such as:

I took in their comments and advice, especially that part about staying positive. Those times I felt Depression beginning it’s slow creep, let me tell you, I was the world’s biggest optimist. I kept telling myself to stay positive. That it would chase away all that negative energy.

Yet Depression still managed to come. Which made me feel like an even bigger failure. Because this time I KNEW it was coming; it had given me notice. And when it came I wasn’t positive enough to keep it away.  How weak was I that I couldn’t even keep Depression at bay when I had warning? What a loser I must be!

It is only recently that I am finally accepting Depression as an illness rather than a weakness. Yes, despite logically knowing – and logically understanding – it is a medical condition, I still held on to some underlying belief that there is an element of weakness to it; that I had somehow manifested it. This is not something I am releasing easily. It is deeply ingrained. But the firm grip I once had is loosening…

I have come to see this as a journey.

Finding the best treatment can be a bit complicated at times. And frustrating. Over the years I have had some not so successful experiences with doctors and therapists. I have tried myriad medications with varying levels of success. It is an often disheartening process of trial and error. Yet there have been many successes along the way as well. Successes which have made all the difference.

Depression is something I continually learn from and about. It’s the ‘gift that keeps on giving’… It humbles me at times. Recently I thought I had kicked it. That I had overcome. I began writing this article months ago to let you know how it was possible to overcome Depression and how wonderful that was. How strong I was.

Depression had other ideas. It returned, leaving me confused and struggling to figure out what had gone wrong. Leaving me feeling weak…again.

What have I discovered in this latest battle? First of all, I recognized the symptoms sooner. Also, I am in therapy with a gifted doctor – have been for the past few years, and I was able to work through what was happening as I went through it. I began a new course of meds, something I fought to avoid (again, that weakness thing). I finally get that medication has its purpose.  It is not ‘bad’ or ‘weak’ to need it. And I do need it. Some people don’t; others need it every day. I suspect I will have that need off and on throughout my life. And you know what? That is OK.

All of us have our challenges in life. One of mine happens to be Depression. In many respects this has been a blessing. I am not less of a person because I have it; quite the opposite. As with any other illness it may at times require me to rest and take care of myself. I also have asthma. When it acts up, I slow down, use my inhaler, listen to my body. Depression asks for no less care. And when I ignore it, as with any other illness, it can worsen.

So when that gnawing in the back of my head begins to whisper, “Weakness…” over and over, I answer back a tad louder, “Illness.” I am learning to listen to the louder voice; to take care of myself. I am healing.

7 thoughts on “Depression: A Journey from Weakness to Illness”