There is something so special about food. We all must eat, breath and sleep (oh ok…and pay taxes and die). Breathing is involuntary, and sleeping – well, that’s a whole other can of worms for me! But eating, even though we all must do it, is done in so many ways. We have a choice in how and what to eat…well, in many cases we do. I believe that when you understand what and how a person eats you have a much better sense of who the person is. One of the first things one is faced with when traveling to another country is eating: where to eat, what to eat, when to eat (we discovered it’s very important to know when to eat in Europe).

There are so many aspects to food. It can be sensual and romantic, fast and processed, wholesome and comforting – or any combination of these. A shared table is often the place of many heated discussions, proposals, intimate conversation and family updates. A table for one can be lonely, or it can mean finally having a relaxing moment to oneself. It really all depends on the day and the person. I love a family meal when the television is turned off and everyone is seated around the table enjoying not only the food but also one another’s company. This is unfortunately a rare occurrence for us these days. During the week my ‘family’ often consists of only my younger son and me…on weekends my husband is present, and during the summer my eldest returns home to join our feasts.

What I wish is that you all take the time to learn how others eat. Perhaps this will lead to a deeper understanding and acceptance of one another’s cultures and differences, which could even lead to world peace! (I can dream, right?) I raise my glass to good food, and more importantly, great family time. Bon Appetit…and Peace Out! 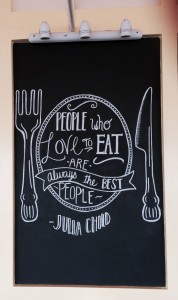 Wow, it has been over a month since I last blogged…I missed the entire month of July!! But how appropriate that I chose today – August 15th – to re-emerge on the blogging scene. Happy Birthday, Julia Child!

Lately, I have been experimenting with gelato and ice-cream recipes. I have always wanted to perfect homemade ice-cream, but found the recipes tended to be less creamy and dense than I prefer, and often the final product was a bit grainy. I came across a recipe for a classic gelato on Epicurious.com and it was the base I have been searching for! My first go at the recipe I added a vanilla bean and cherries to the base. The cherries were fresh organic cherries which I pitted and chopped. I added a touch of Grand Marnier, nutmeg and a spicy syrup (simple syrup infused with red pepper flakes, cardamom, star anise, cinnamon and nutmeg). The end result was a delicious creation of creamy icy goodness!

Yesterday I made a different gelato. My son requested a coconut-banana-rum ice-cream, so I added shredded unsweetened coconut and about one tablespoon of dark rum to the base. I left the coconut in because I like the texture it creates, but if you want a completely smooth base you can strain out the coconut when it is ready to go in the ice-cream maker. I pureed two frozen bananas and when they were completely smooth and creamy I added a scant tablespoon of dark rum and 1 tablespoon of brown sugar. I had planned to swirl this into the coconut base when it was almost frozen, but it ended up getting completely mixed in. No matter…on bite and I was transported to a tropical paradise! Next time I will top it with a caramel sauce.

I have some other flavor combinations to try. I’m planning to make a strawberry gelato with black pepper and possibly anise. I have had the strawberry-black pepper combo in the past and want to recreate it at home. I think the anise would add another dimension, but I am not sure if it would be a good dimension. I also have plans for a peach-chipotle-honey combination. When peaches are at the peak of their season I love to slice them on top of a healthy scoop of vanilla ice-cream. I pour a little brandy over the ice-cream (to taste), and follow it up with honey, chopped pecans and a touch of chipotle powder. As a side note: perfectly ripe peaches are also delicious halved,a little goat cheese added to the center, and drizzled with honey (and maybe a chiffonade of mint)…makes a wonderful appetizer and pairs well with a crisp white wine or glass of champagne.