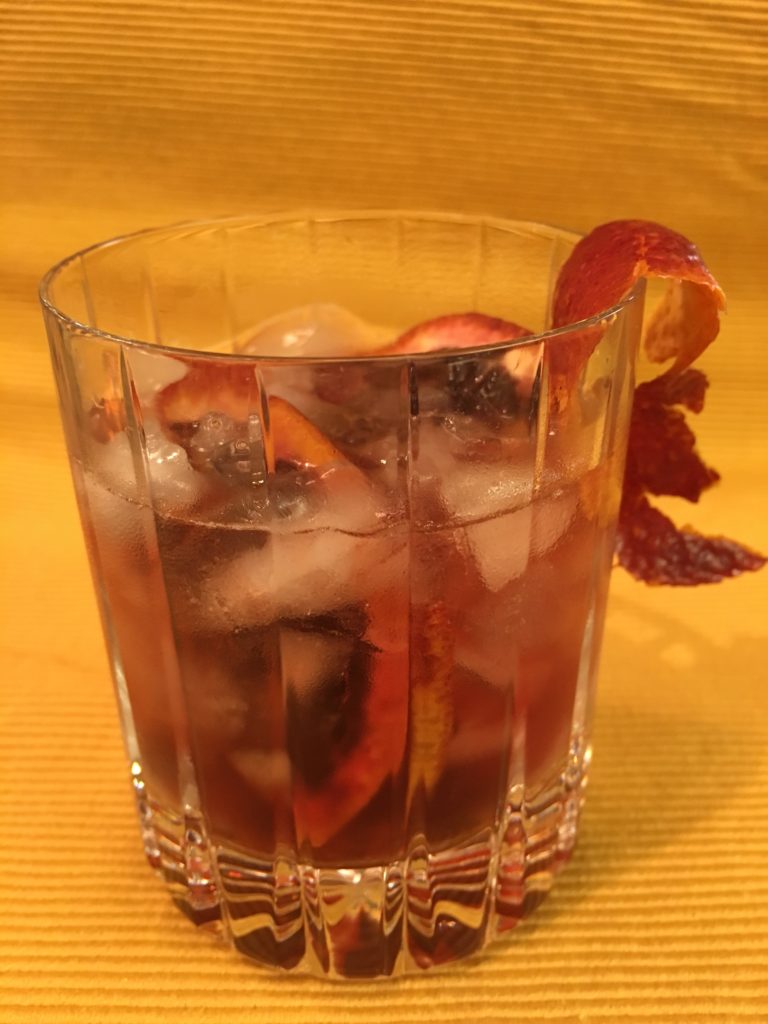 A [very good] friend gifted me with the most delicious cherries recently. Sweet with the first bite, yet a bit sour on second impression, they are divine for all sorts of taste sensations. She suggested they would pair well with an Old Fashioned, and that is exactly what we made as soon as she delivered them.

If you’ll remember, I am a Bourbon Girl…well, really more of a Whiskey Girl since I also love Scotch and Rye and pretty much anything “whiskey.” I see no reason to discriminate. In fact, the very first mixed drink I ever made was a Manhattan. I was probably ten years old and my dad taught me the recipe. I used to bring them to him as he watched TV, taking tiny sips so it wouldn’t spill as I made my way down the stairs. I know what you’re all thinking: “That was one lucky girl!” [sarcasm] Okay, okay, perhaps it wasn’t the best skill to pass along to a kid, but it’s served me well over the years…and I, in turn, have served others well over the years! By the way, my dad no longer drinks (in case you’re wondering).

Back to Old Fashioned’s. Actually, let’s first get back to the cherries. So amazing! Years ago I evolved from those neon jars of sickening sweet orbs and moved on to Luxardo cherries. I thought they were the bomb. Certainly they were way better than the glow-in-the-dark cherries I grew up with. And way more expensive. I believe a jar of these babies goes for around $18-25 depending on where you buy them. 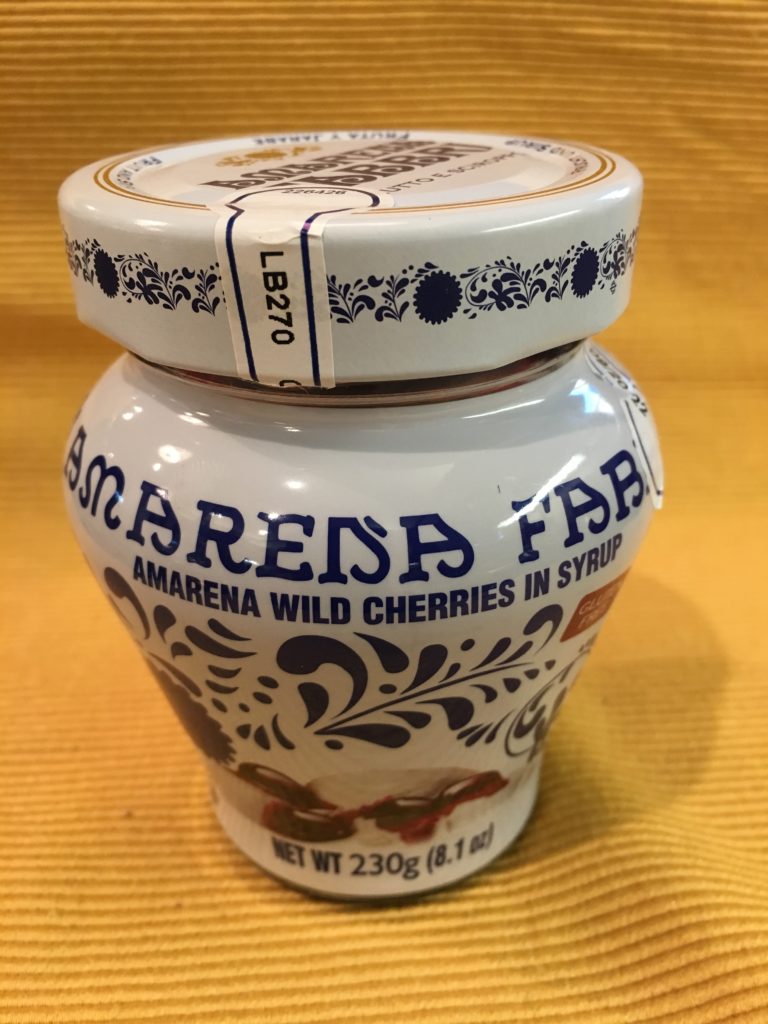 Can I just say “Wow!”?? With my first taste I was already planning on who I’d give my Luxardo jar to. I cannot fathom there being any other cherries worthy of garnishing the myriad cocktails I make more so than these. I checked online and can get them on Amazon for around $13 for the size jar pictured above (click the blue “Amazon” to link to them…I get zero compensation from anyone). I know they are also pricey, but really, if you are going to craft a decent drink, don’t you deserve a decent garnish to go with it?

Back to Old Fashioned’s (finally!) 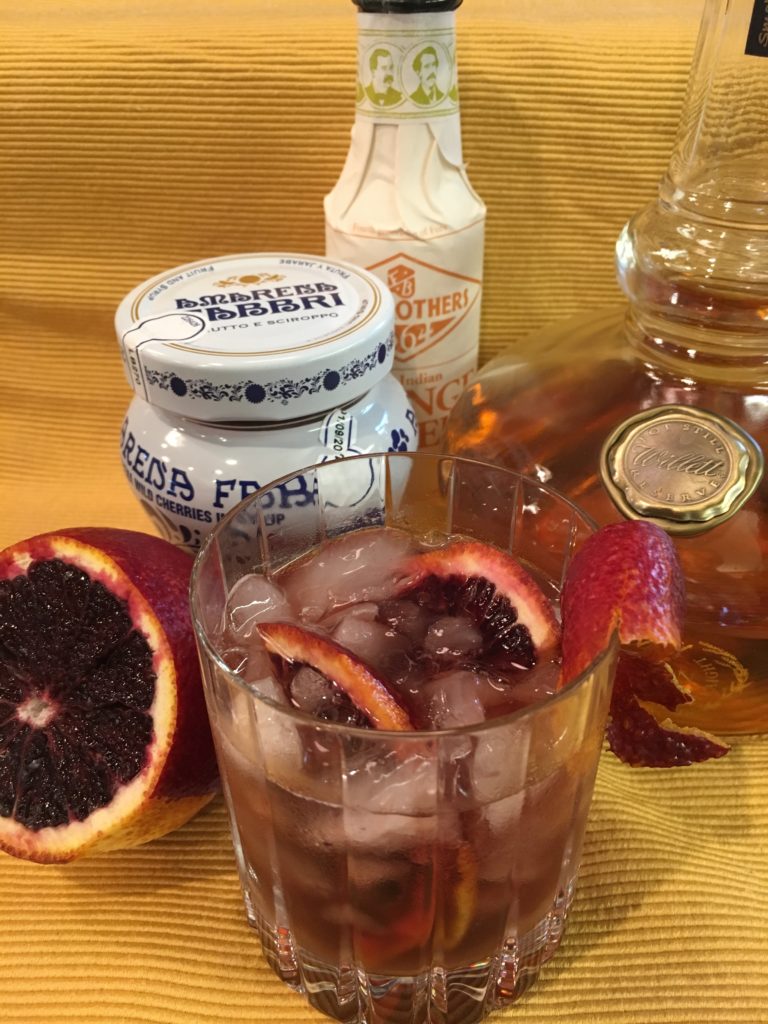 One classic Old Fashioned recipe involves soaking a sugar cube in bitters, then muddling them together. Next you would add ice, followed by bourbon, then an orange slice and cherry to garnish. Voila!

My friend and I made our Old Fashioned drinks using Willett’s bourbon (it has caramel undertones which work well here), the Amarena cherries, and orange bitters. Rather than using a sugar cube, we spooned in some of the syrup from the jar and added a generous shake of orange bitters. We muddled in the cherries here to get as much flavor as possible out of them. After that we added crushed ice and stirred in the bourbon to mix it all together and chill it. I have to say, the end result was divine. Heavenly. Other-worldly.

I did not have any oranges to garnish our drinks, and that was the one component we both felt might make it better. At the store yesterday I spotted blood oranges…in my cart they went! Last night I did a bit of experimenting to see if it added any depth. I have to say, I don’t think last night’s endeavor was any better than the version we made on Sunday; however, it had its own merits and was just as nice in its own respect. The final verdict: you really can’t go wrong either way.

Not only for cocktails?

I’d like to think this jar would last me for a good long while. And perhaps it would were I merely using it for drinks. Yet I see a future for these cherries that goes beyond cocktails. I’m thinking ice-cream toppings, cakes, cookies…maybe even over pancakes or French toast. I bet they would even be tasty in a baked brie with some slivered almonds thrown in for good measure.

Have you tried these? Any further suggestions for how to use them?