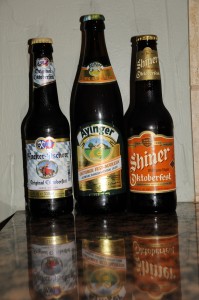 Question: When in Germany can you experience March in October? Answer: When you are in Munich drinking a Marzen beer during Oktoberfest!!

Every year at precisely noon on the first day of Oktoberfest the lord mayor of Munich steps forth for the ‘Official Tapping of the Keg’, a traditional ceremony to kick off the festival. It is one that is eagerly anticipated by beer drinkers far and wide. And the beer most associated with Oktoberfest? That would be the Marzen-style brews. The term Marzen (also spelled Maerzen; pronounced ‘Maer-tsen’, NOT ‘Mars-en’) is German for March which is when that particular style of lager is brewed. Back when Oktoberfest first began lack of refrigeration made brewing beer in the summer unheard of due to heat and bacteria issues. Brewers instead prepared their beer in March, and it usually had higher alcohol content – typically 5.0-6.2% – to aid in the preservation process. Once bottled it was put in ‘lagerns’ – German for storage – in this case caves and/or cellars. Often these lagers were located near a water source such as a pond, allowing them to harvest blocks of ice in the winter when the ponds froze over. They used the ice to keep the beer cold until it was ready to be consumed. Actually, some of these cellars are still in use to this day.

Bavarians are very serious about their beer, and VERY PARTICULAR!! Way back in 1516 a ‘purity order’ was established in Bavaria – called “Reinheitsgebot” – making it illegal for its beer to be made from anything but hops, barley-malt (originally just barley) and water. Yeast was eventually permitted as the fourth acceptable ingredient. All of Germany accepted this enactment in 1906; however, as with most rules there are exceptions…loopholes if you will. Some circumstances do allow other ingredients to be incorporated, such as sugar, wheat and even coloring.

Marzen itself is a medium to full-bodied darker lager, having a slightly sweet taste. Bitterness is usually on the low side but varies among brewers. The color may range anywhere from amber to deep copper, with tradition leaning toward the darker brews. It is the historic offering at Oktoberfest. Due to cooler weather October was the time brewers could begin making beer again. They needed to empty out the kegs to make space to store the new batches, so they let their ‘Marzen biers’ loose at Oktoberfest .

So make sure to fill your steins with a proper Marzen on this 200 year anniversary of Oktoberfest…To all of you I raise my stein and cheer ”Prost!”

**the reason barley was the only grain allowed has pretty much everything to do with the fact that they wanted to make sure the wheat and rye were reserved for bread-baking. In other words, it was protection for the bread industry.
**Ales are made with top-fermented yeast. This enables the finished product to be ready quickly, often in only a few days
**Lagers are made with bottom fermented yeast. They need cooler temperatures and take longer to reach full maturity, often 1 – 3 months. Marzen falls into this category. 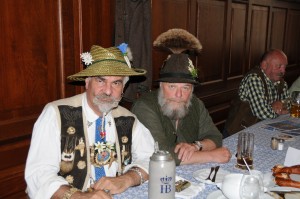 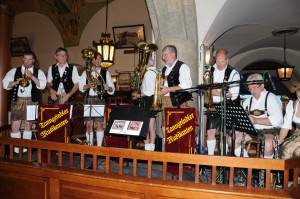 Oktoberfest is upon us!! Today kicked off the 200th wedding anniversary of Prince (later to become King) Ludwig I and his bride, Therese von Sachsen-Hildburghausen of Bavaria (try saying that 3 times fast, or even once slowly)… Question: if 100 years warrants a 10K diamond – and according to Google it does – what is the expected gift for 200 years??? I have not discovered the answer, but I suspect it is BIG!

Prince Ludwig I and Therese married in October of 1810, kicking off their new life together with a ‘little’ one-week long celebration. The entire town was invited, something unheard of in that day and age for a royal wedding. The wedding ceremony got the ball rolling on October 12th, and the festivities continued through the week, eventually being brought to a close with a horse race on October 17th. Thus began what many consider to be the most celebrated festival of the world. Oktoberfest has grown and evolved over the past two centuries and has expanded to countries all over the world. Munich locals call it ‘Die Wiesn’, referring to the meadow in which the royal couple was married…and where it is still held today. The horse race – a highlight of the earliest festivals – is no longer included in the many activities; however, many other traditions and events have taken its place. The ‘official tapping of the keg’ is one of the highlights…obviously beer-drinking is directly associated with Oktoberfest and has been an important part of its celebration since around 1818. And of course you really cannot have an authentic Oktoberfest without traditional folk music and men dressed in lederhosen and women in Bavarian dirndls. 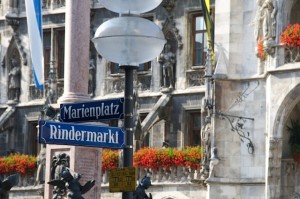 I hear the rumblings of ‘but why is it called Oktoberfest when it is held in September?’…As you can see, it did originate in October and was held solely in October for many years. However, as it grew from one week into several it was decided to move the start date up to September. This allowed the festivities to be enjoyed during more favorable weather conditions. Now it begins the third Saturday of September and runs through the first Sunday of October. A special stein is designed each year, and this year’s stein features a portrait of the happy royal couple to commemorate their 200th anniversary. Since 1810 the festival has been held 177 times. Those years which did not see a festival were due to either war or cholera epidemics.

My posts over the next couple of weeks will delve deeper into the history and traditions of Oktoberfest. I will include information on traditional foods and drink served at the festival. My German heritage eagerly awaits this opportunity!

Until next time: Guten Appetit!

For the past couple of years I have been trying to ‘find myself’ and figure out what path I’d like to wander around on during the next phase of my life. I’ve considered many options, from accounting (my college degree – hated it) to working in a restaurant (too physical for me at this point). Some of the in-between options I’ve considered range from copy-writing to opening a new-age exercise studio to creating a website. I have even thought about a business grocery shopping for others…there is a real need here, and who is pickier than I am when it comes to food??? I did sign up for a local photography class which begins in about a week. Perhaps Foodography is in my future? All I know is that I need a much better answer to the question “And what do you do?” It is a bit awkward telling others I am a stay-at-home mom when my boys are 19 (and not even home) and 16. Basically, I have now become a ‘stay-at-home-wife’. This is not so glamorous as one might imagine. One, I am not popping bon-bons one after the other all day long with my soaps running in the background. And two, I do still have a 16 year old at home…’nough said!!

Yes, I know how fortunate I am to be able to stay home, especially in these times of a possible double dip recession. But the grass is always greener…so I’ve heard it said. And what does any of this have to do with a food blog? Well, I suppose it has to do with the hunger of wanting more out of life, of wanting to make one’s life the best it can possibly be. Sure I have a terrific life. I am most thankful for that. Truly! But that doesn’t mean I can’t want to enrich it further. I want to know that I have made a difference in this world, that I have helped in some small (or large) manner to make the universe a better place.

So my question remains: How??? I welcome your answers…..