This has been a great week for reconnecting with family and friends. I have enjoyed the time spent with parents, in-laws, extended family, and friends. I am grateful that I recovered so quickly from being sick, and just in time for Christmas, too! We have traveled all over the area – DC, DE, PA…we head back from DC to TX on Thursday (New Year’s Eve) in time to bring in the new year with friends. I look forward to a bit of peace and serenity once the holidays have passed. This has been the busiest season I have ever had with Thanksgiving (and those 11 pies!), London, being sick, and finally travel to DE/PA to visit family.

The new year is nearly upon us. As with many of you, I am considering what, if anything, I will adopt as my New Year’s resolution. I generally avoid making such committments since they are usually tossed aside by the end of January, but I think I may give in this year. My New Year’s Resolution will involve working on my website – expanding it to evolve into something much more exciting. Writing has always been one of my passions, and food is an even bigger passion than writing. I look forward to sharing my love of all things food: recipes, restaurant reviews, history of food, nutrition, etc.

And to anyone out there who might actually be reading this: What is *your* New Year’s Resolution???

Well, it has been a rough week or so. After all of the hustle and bustle associated with Thanksgiving, London, and Christmas preparations my body finally gave in to it all and forced me to slow down. I am feeling much better as of this morning and have regained my Christmas cheer along with my health!!! I have baked no cookies, and my annual homemade eggnog had to fall by the wayside this year to allow for my body to heal…I am hopeful that I can make up for this before the season ends…

This (self-proclaimed) London-girl is back in TX, lamenting the fact that she had to leave after such a seemingly short visit…

Truly I feel as if London is the place I belong. My eyes teared as the plane alit from Heathrow’s runway to return us to Dallas, and I sadly watched the English countryside grow smaller as we traveled further and further away. The culture and buildings and people are so quaint…London is surely more beautiful at Christmas than even New York City. The city itself is cleaner and the people seem friendlier. I would move there in a heartbeat!

Our driver to and from Heathrow is a renouned Indian chef who has an extensive list of people for whom he has cooked, including, but not limited to, Princess Diana and other British royalty, much of the Hollywood crowd (ie Brad Pitt, Jennifer Aniston, etal), and many mid-eastern royalty. He has even cooked for President Obama…I am not exactly sure why we were fortunate enough to have him drive us, but I certainly enjoyed my time with him. He has many stories to tell, and he did so during the entire drive to and from the airport. He has lived all over the world, and travels extensively. 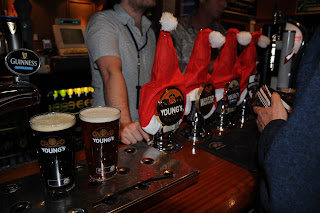