For some reason I woke up today thinking about my grandfather…my dad’s dad. And corn. Say, what? Hold on, hold on, I’m getting to how they go together.

As you may recall, I am participating in a month long blog challenge. The goal is to post 31 times in 31 days – one time per month for the entire month of July. It is now the 26th day of the challenge, and to be frank, I woke up today not sure where I was headed. I thought about all things that mean ‘summer’ to me; namely, my favorite foods of summer. Corn popped into mind (no pun intended…) and I remembered a great method to cook it that I had learned about a couple of years ago. I’ll post that further down, so don’t go too far!

Out of the blue I suddenly remembered our visits to New Hampshire in the summers to see my grandparents who lived there. My grandfather could often be found after work in a local bar, hanging out with the lobster fishermen. When we would visit he would get lobsters for all of us…yes, we each got our own lobster. This was something I looked forward to every summer. Who wouldn’t? I was much older before I realized lobster was considered a delicacy; at the time I assumed everyone ate lobster…

He would bring the lobster home, and Grandmom would cook it along with some corn on the cob and a few other sides. At dinner we’d sit and pick at the lobster. We buttered the corn on the cob and had fun eating it row by row. Grandpop had false teeth. He would – every year – take out his teeth and roll the corn on the cob against his gums, pretending he was trying to eat it. My brother and I would burst into giggles at this. Then, after being chastised by Grandmom, my grandpop would put his teeth back in and proceed to eat normally. So much fun for us kids!!

As for that tip I wrote about earlier: About 2 years ago I read about cooking corn on the cob in the microwave and it has revolutionized how I cook corn ever since. I wrap the ear of corn – husk and all – in a damp paper towel, place it in the microwave and cook it on high for 2 1/2 minutes. I make one ear at a time.

What makes this method so perfect? A couple of things:

I use corn in so many more dishes now. Sure you can stick with just plain corn on the cob, add a touch of butter, some salt and pepper: delicious! I slice it off of the cob and use it in salads or homemade cornbread. Perhaps my favorite way to serve it, as well as being the easiest and tastiest way, is to make Creamed Corn. I could make an entire meal out of creamed corn and fresh summer ripened tomatoes…summer on a plate! 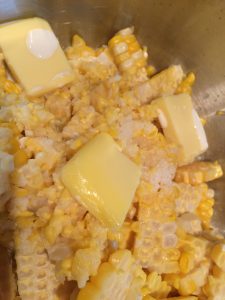 In a medium sized pan combine:

*to milk the cob: take the back of a knife and run it over the cobs once the corn has been sliced off of them. This will yield some of the corn which did not come off, as well as the liquid from the cob

Heat ingredients together over low heat until the butter melts and everything is warmed through and just begins to bubble around the edges. You can eat it this way or crush some of the kernels to give a creamier consistency.

I like to serve it with summer-ripe tomatoes and basil. There is something about that flavor combination that makes the ‘perfect bite’ for me.