This week has flown by. Our son has been visiting, but he heads back to school today. I was happy to be able to send him off with a decent homemade dinner on his last night here. He and I spent some time yesterday morning trying to figure out his last meal before leaving (see, I really was Italian in a past life!!). I commented that one dish I used to look forward to when I was in college was the Spaghetti and Meatballs my husband’s mom always made. It was a favorite of mine – and of everyone else, too – and it’s one of the first recipes she shared with me. She learned how to make the sauce from her Italian family – meaning her family who came to visit from Italy. It is simple yet so delicious! Growing up, her family had spaghetti at least once a week, sometimes twice. She often tells how her mother made the pasta by hand, rolling out the dough on their kitchen table. Once cut out it was laid around the kitchen to dry. I wish I had been around back then to watch and help. I can almost smell the aromas coming from that kitchen…

As you have probably guessed, we decided on spaghetti for his send-off dinner. The meal turned into a melding of old vs. modern. We used the traditional sauce recipe which had been handed down to me, and we added in vegan meatballs for him (regular meatballs and Italian sausage for my husband and I). I used pasta from a box rather than making my own. I do enjoy making my own pasta, but I preferred to spend the extra time visiting rather than rolling out dough and cleaning up later…a wise choice if I do say so myself.

What made the dinner even more special was cooking together; sharing the kitchen. This is something I don’t do often (it has been said I’m a bit of a control freak in the kitchen…ahem), but I am getting better at it. I love the memories that get created when I [finally] allow others in to work with me, to help out. Sometimes I even learn a thing or two myself!

Searching online, I discovered a recipe on Minimalist Baker for these Sun-Dried Tomato and Basil Meatballs, which is the one I used for the vegan meatballs. They tasted so amazing, and the recipe is one I will keep on hand for future dinners.

The tomato sauce uses carrots to add a touch of sweetness rather than adding sugar. They not only sweeten the sauce, but the carrots themselves are a delicious addition to the meal. I leave them in bigger chunks to simmer away. They absorb some of the flavors of the sauce as they cook and become tender. I highly recommend trying it if you have never done so. To keep the sauce vegan, I cooked the sausage and meatballs for my husband and I in the oven covered in some sauce. The vegan meatballs also baked in the oven.

The meal was rounded out with a green salad, some bread and a bottle of red wine (Italian of course). Minimalist Baker also had a recipe for Vegan Parmesan Cheese (see photo above). While it did not taste exactly like the real deal, it was good. It was a healthy and tasty meal…a nice way to send him back to school. And he had three large servings. I’d say this was a great testament to the level of tastiness. 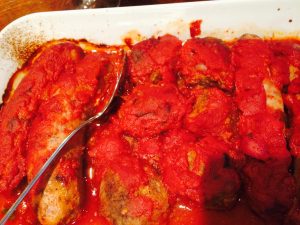 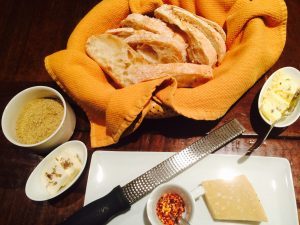 As I mentioned, the full meal is not the exact way I was taught to serve it, but it reflects the evolution that has occurred over the generations. I imagine the recipe I was taught had perhaps also evolved somewhat before it was handed down. Further, I expect the recipes I pass along will be modified over time as the next generation makes its own tweaks and takes into account new methods and preferences. It’s all part of the process. It’s all what keeps things fresh.

2 thoughts on “The Evolution of Spaghetti and Meatballs”

Hope you all had a wonderful Thanksgiving. I've been in a bit of a carb coma over here since it was only my husband and I for dinner. Despite it being only the 2 of us, I managed to make 4 pies. Yep, that's 2 per person for anyone doing the math!! Hence that carb coma I mentioned above.

Along those lines, when you make pie crusts from scratch you are bound to have a few scraps of dough leftover. Not one to let things go to waste, I turned mine into cookies. (As if there were not enough sugary treats in my life at the moment...)

I rolled out the scraps, spread them with a layer of fig jam, then rolled it all up and coated the outside with sugar. Slice and bake for a fun and quick treat!! ... See MoreSee Less

Tonight's Thanksgiving prep: Sweet Potato Rolls with Cardamom!! My favorite!! And because I don't know how to scale back, I made 2 batches. One, with dried tart cherries; the other with golden raisins. **They have both been taste-tested and approved 😋 ... See MoreSee Less

Reminder: THAW YOUR TURKEY!! If you plan to roast a turkey on Thursday, remember to move it from the freezer to the fridge so it can thaw properly. Mine is around 18 lbs, and I moved it yesterday (I know, I know...there are only 2 of us this year! but it's what I already had in my freezer!!). If yours is smaller it will take less time. I recommend placing it on a sheet pan or large tray to catch any juices that might seep from the wrapping. This will help keep your fridge clean. Who has time to clean up another mess on Thanksgiving???

The link (below) has a guide to how many days it will take to thaw in the fridge. There is also a chart for thawing using the cold water method.

This Guide Makes Thawing A Turkey A No-Brainer

If you bought a frozen turkey, these charts are your new best friends.
View on Facebook
·Share

My kitchen has the aroma of Thanksgiving!! Today, I made my Mulled Cranberry Sauce, a recipe I created and have fine-tuned over the years. It's tasty, can be made in advance, and more than that, it's EASY! I hope you'll give it a try!!
http://cleansedpalate.com/easy-mulled-cranberry-sauce/ ... See MoreSee Less

Cranberry Sauce. It's one of those things I never really thought much about growing up.
View on Facebook
·Share