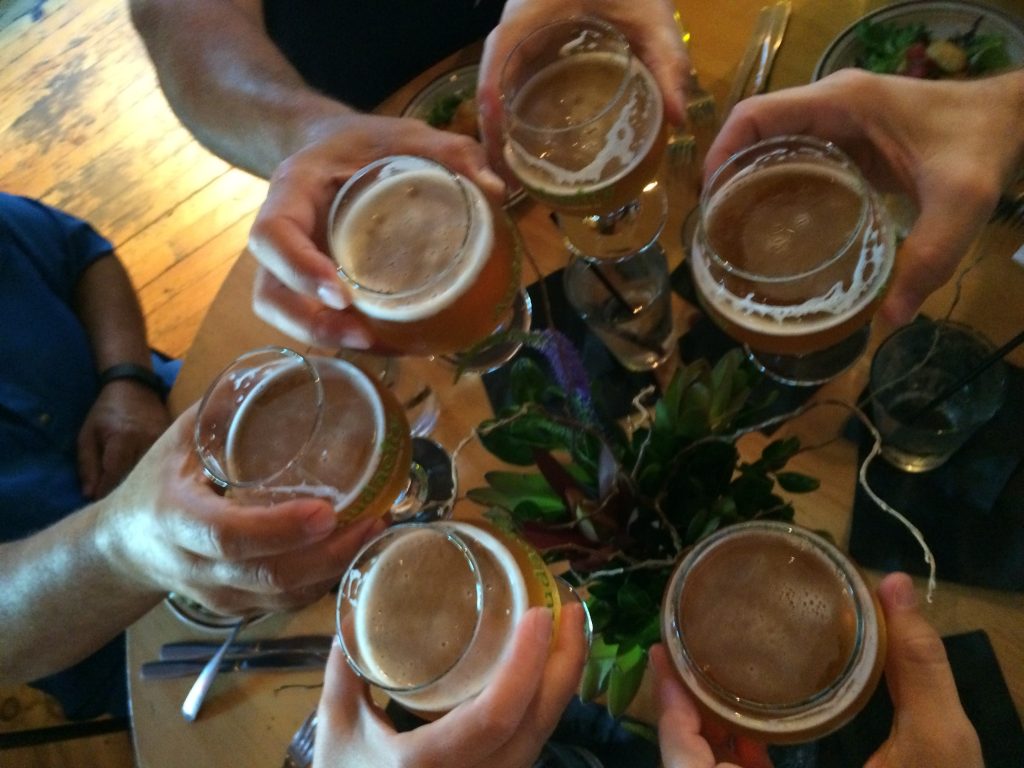 Friends. You just cannot underestimate the value of good friendships in your life. This has been brought home to me these past few years living away for extended periods of time. Now settled back in our permanent home, we truly appreciate the time we have with our loved ones. It has been a blessing to share in both good times and bad, and the fact that we remain connected is something I am so very thankful about.

One of the things I really missed being away so much was the get togethers with our friends. It was difficult making sure we kept in touch with everyone. Having our hands in too many pots made it hard to feel as if we were doing any one thing well. So we have relished getting back to our friends full-time. We are so fortunate to have such a diverse group of pals to hang out with..

Last week we got to hang out with several of our friends at one of our favorite hang outs. Taverna Rossa is a local restaurants with an emphasis on pizza and beer. They have an amazing selection of beer on tap as well as in the bottle, including a nice pick of local brews. My husband likes to head there often for happy hours with his buddies. It is a favorite of ours for both food and drink. Considering how rowdy those guys can get I’m surprised they let us back. 😉 But let us back they did!

Last Wednesday was one of their beer dinners which they hold every so often. Each dinner features a local brewer, and the chef from Taverna Rossa pairs a menu designed to highlight each beer used. For this dinner Taverna Rossa joined with Audacity Brew House, a local Denton, TX brewer. Five beers were featured, and Chef Vince Cano created a course to pair with each one. 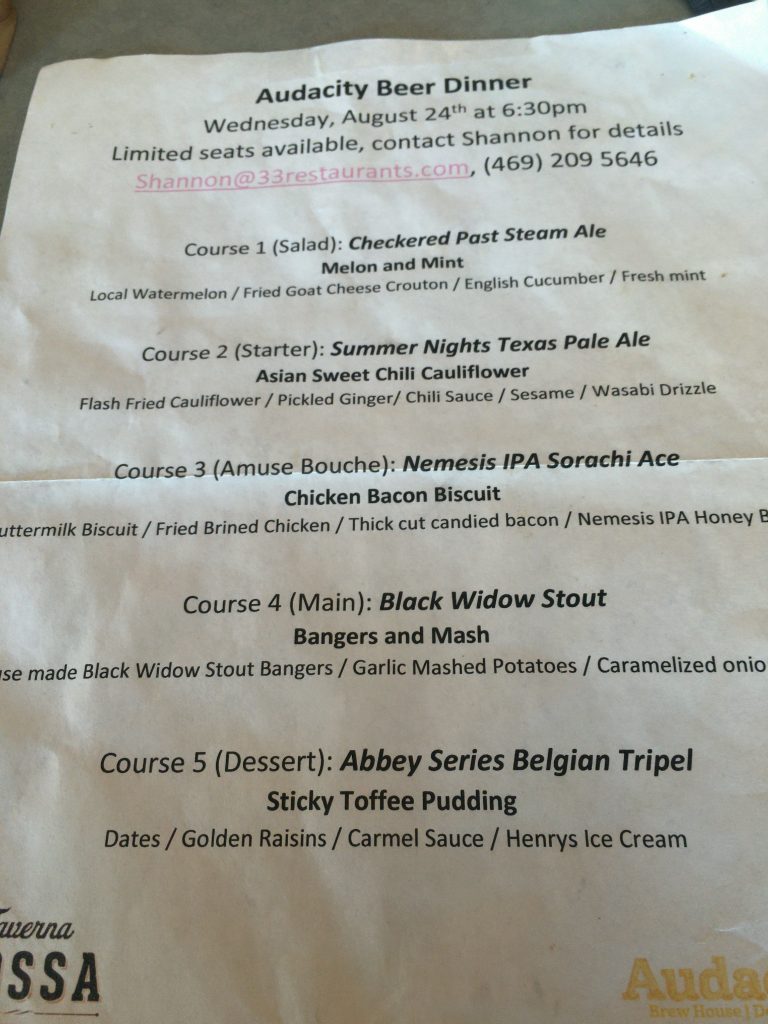 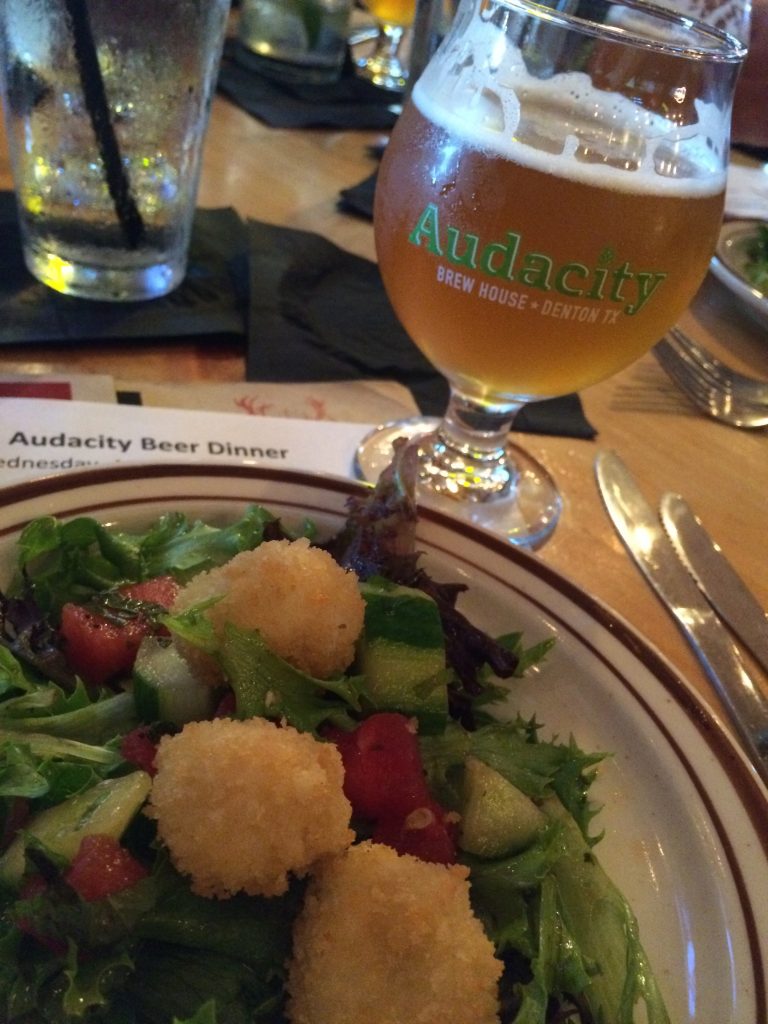 Chef Vince did an amazing job with the flavor combinations! We began with a salad of greens topped with watermelon, cucumber and mint, and it was paired with Audacity’s Checkered Past Steam Beer. This particular brew happens to be the official beer of the Texas Motor Speedway. Nice! I will say upfront that of the five, this brew was my favorite. I had never heard of a steam beer, which uses a lager yeast in the brewing process. Lager yeasts are typically cold fermented (such as in a Marzen beer from a typical Oktoberfest), but steam beers ferment them at warmer temperatures instead, yielding a lightly bitter edge (but only slightly bitter).  This particular steam beer had an essence of apple on the finish. To me, it is a great beer for a hot summer day…easy to drink and high on taste, with or without food. 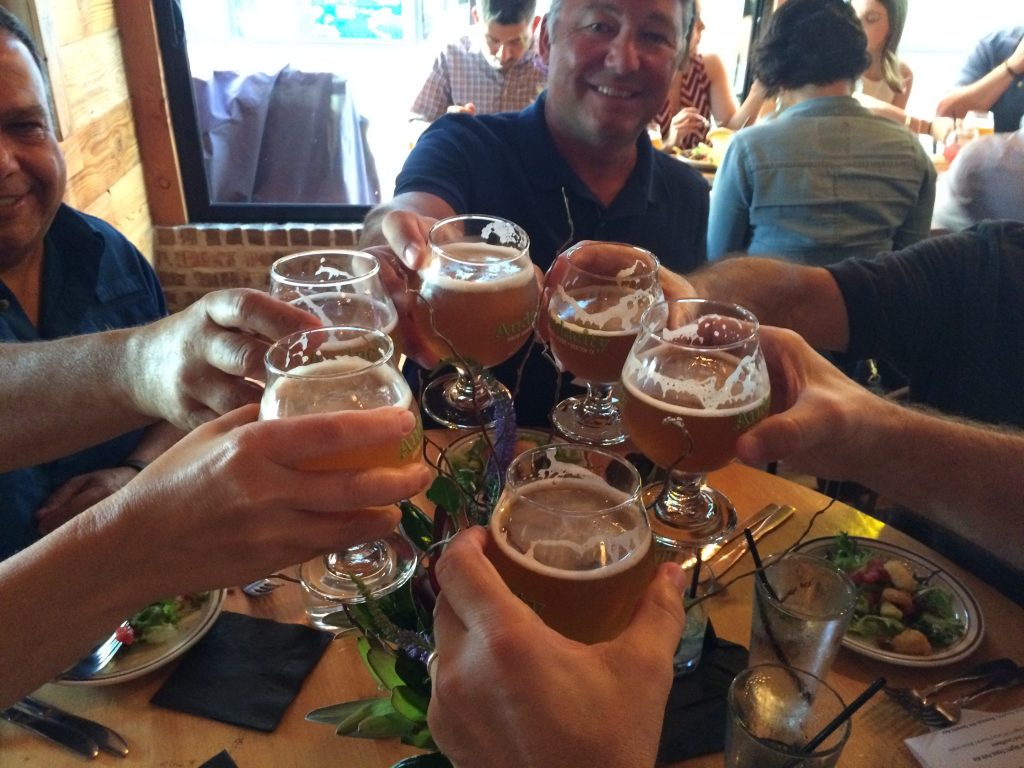 The second course was made with cauliflower. Now before you make that face (you know the face I’m talking about!) hear me out. This was an Asian Sweet Chili Cauliflower. It was battered and fried, served with some pickled ginger, a chili sauce, and a drizzle of wasabi. It was like hot wings meets cauliflower, and I mean that in a very good way!! I could have eaten an entire bowl of this, and would have had the option had existed. Audacity’s Summer Nights Texas Pale Ale went with this course amazingly well. I am not a fan of hoppy and bitter beers, but it worked here. It wasn’t overly hoppy, but it definitely had elements to it. But prepare to be somewhat disappointed…this was the last keg in the DFW area (for now)…Don’t worry, it was well looked after…we took good care of it!! And I’m sure it will be back for an encore in some future season.

Course 3 featured Audacity’s Nemesis IPA Sorachi Ace. This was my favorite of the five courses food-wise. It slightly edged out the cauliflower course, but only slightly. It was a Chicken Bacon Biscuit. You heard me: Chicken. Bacon. Biscuit. [drool] The chicken was brined then fried, placed atop half of a buttermilk biscuit, topped with bacon – hold up: make that candied bacon! – and then the other half of the biscuit was delicately balanced on top. Oh, and that biscuit?…it had a smear of butter (because butter makes everything better). But it wasn’t just any old butter. It had a bit of honey and that Nemesis IPA Sorachi Ace brew mixed into it. Oh, yeah!  Note: Taverna Rossa serves brunch on the weekends, and I would LOVE to see this make an appearance on the menu (hint, hint). When it comes to brunch, nothing beats chicken and waffles. Except this. But I digress…The Nemesis paired well with the dish. It was definitely more bitter and  not one I particularly cared for it on its own. I’m just not a huge fan of bitter beers. However, as with all of the pairings, it worked flavor-wise with this course.

Course #4 used the beer it was paired with in the cooking of the dish as well. Chef Vince prepared Bangers and Mash, cooking the Bangers in the Black Widow Stout. They were served over garlic mashed potatoes (which were drizzled with a caramelized onion gravy). Mmm, delicious! Black Widow is a Nitro Stout, coming in around 9% for the alcohol level. Admittedly it was not my favorite stout on its own, but it was decent. I swear it had a sort of sesame aftertaste. No one else seemed to pick up on that, so maybe it was just my tastebuds doing weird things. Again, this worked with the dish very well.

The final course was a sticky toffee pudding paired with the Abbey Series Belgian Tripel. For much of the table this beer was a favorite. It was wonderful when drank alongside the dessert. It had a higher alcohol content at 10.2% and was sweeter with an almost pineapple essence to it. It’s not necessarily one I would drink on its own, yet it was great as a dessert beer. The toffee pudding was served with some of Henry’s ice-cream, a local favorite!

**My apologies to the staff for the rowdiness of our crew  (I dubbed us the Knights of the Round Table because, well, we were at a round table. Yeah, I know…cheesy). But we all had an amazing time and created some fun memories. And in the process we had a fabulous meal. Thank you Chef Vince!!

A few tidbits on Audacity:

Taverna Rossa has their next beer dinner planned with Martin House Brewing Company, a local brewer from Ft. Worth, Texas. As of this writing their site shows Wednesday, September 21st as the date for this dinner and is slated to be the last of the year. If you are interested make sure you check their website for details. Tavernarossa.com