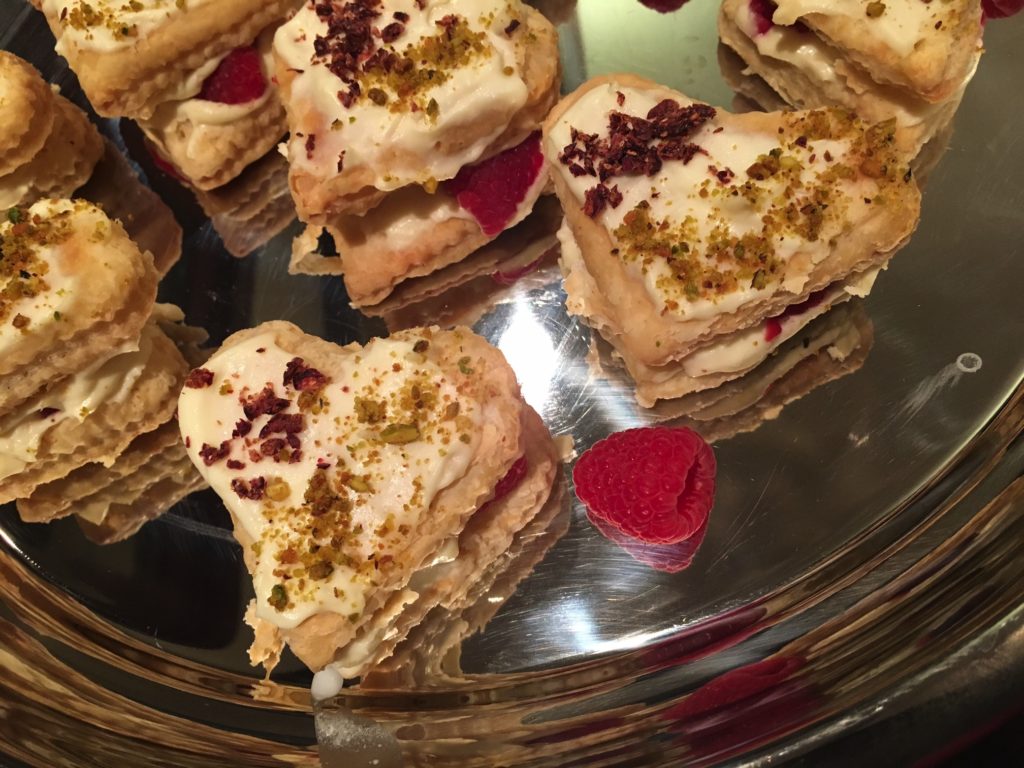 A couple of weeks ago my husband and I hosted a Valentine’s Dinner with a group of dear friends. My in-laws were also in town, and we were so happy to have them join us as well!! We get together with this group often, usually in one pot-luck fashion or another. We love to eat! One of the couples hosted a beer-pairing dinner for New Year’s Eve where each set of guests brought a dish paired with a beer. My husband and I were traveling, so we missed out on all of the fun.

To remedy that, we decided to host our own dinner.

We chose an Italian theme (what else?) for this Valentine’s Dinner to celebrate the love of enduring friendship. The idea was for guests to bring an Italian themed course paired with an Italian wine. I had them sign up for dishes so we didn’t have duplicates of one course and none of another.

The courses included: an appetizer tray (antipasta), breads, salad, a pasta course (primi), a main course (secondi) with sides (contorni), and finally, dessert (dolce).  One guest brought an Aperol spritzer as a starter cocktail, so we all sipped on that as we nibbled on the antipasta.

The antipasta was a typical assortment of Italian cheeses and meats, with some olives and vegetables as well. What made it stand out was the homemade ricotta cheese. Yes, you read that correctly! One of my guests made ricotta cheese from scratch. And it was delicious! What was even better than the ricotta itself? That would be the look of pride on his face as he presented that platter, all of us ooh-ing and aah-ing over it as we sampled our first bites. Priceless!

From there the plan was to have each person serve their course paired with the wine they chose to go along with it. Well, sometimes things don’t work out as planned. The hour grew late, and we eventually decided to plate everything at once. Everyone pitched in to streamline the process, and soon we were ready to sit down and dig in. 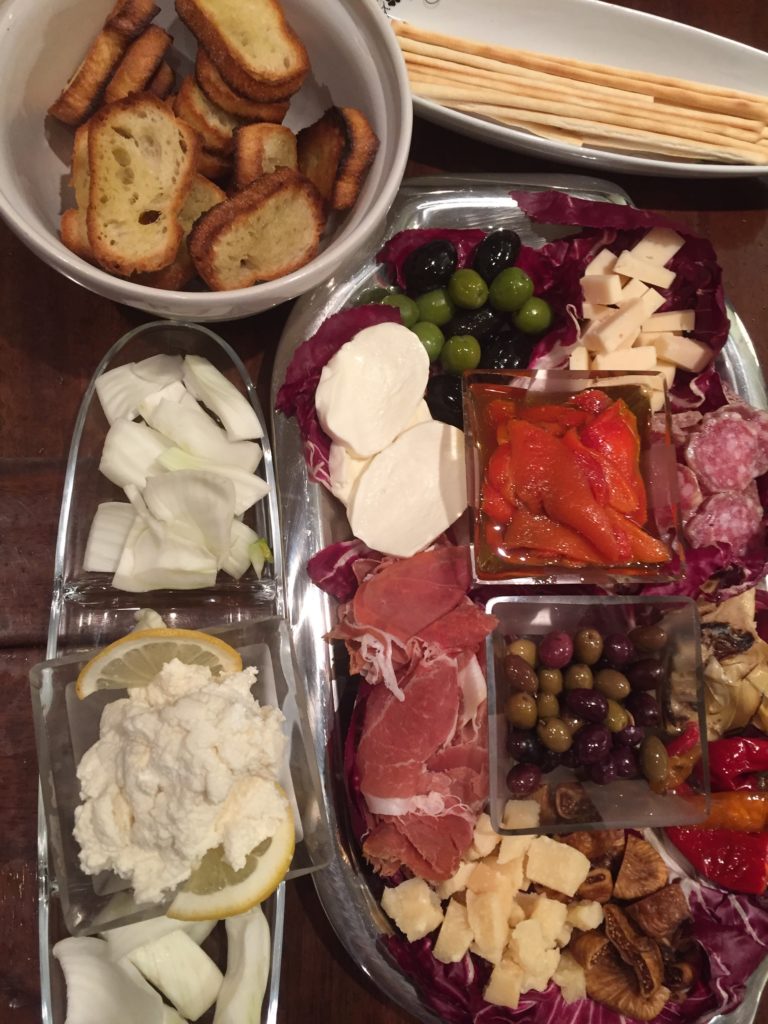 Did someone say Ossobuco?

I prepared Ossobuco, a new-to-me dish. Of course I had heard of it…I don’t mean it was totally new to me. But can you believe I had never eaten it…not one bite? I had always wanted to try it, but for some reason I never did. Not sure why, but hey, things happen. It took me almost fifty years to get to it, but finally, here I am!

It was a gamble to make it since I didn’t even really know how it was supposed to taste. However, I read through many recipes, both online and in my various Italian cookbooks. The technique sounded very much like a braised pork dish I often prepare, only using veal shank in lieu of pork shoulder.

In the end I mixed and matched recipes to fit the flavor profile I was seeking, making notes as I went along. I decided to prepare it the day before the dinner. Several versions I had read said it could be made in advance, so I gave it a shot. The morning of the dinner I had an orientation to attend for several hours, and I was worried I would not have time to make it otherwise. Plus, I was also in charge of dessert, which I planned to make the day of the dinner. Every little bit counts time wise, eh? 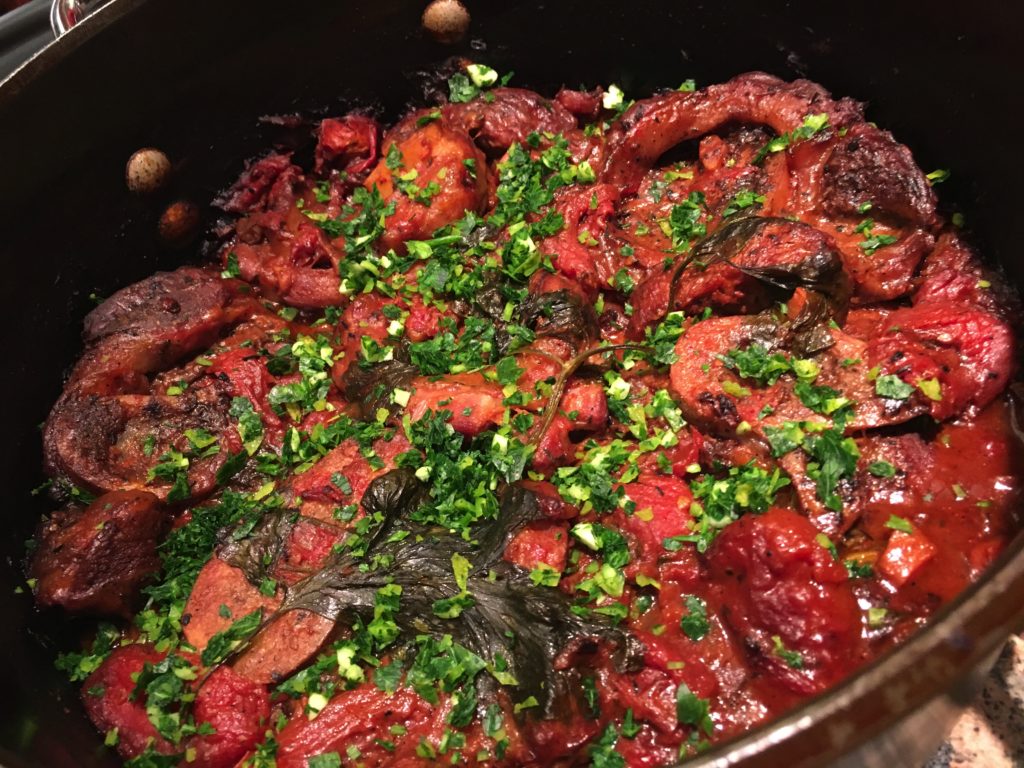 All I had to do the day of for this dish was to reheat it in a low oven for about an hour, and just before serving I added the gremolata, a mixture of parsley, garlic and lemon zest. Yum!!

With the Ossobuco we had a couple of different breads and Caesar salad (with homemade dressing – delicious!). One couple brought homemade fettuccine which was tossed with pesto; another couple brought a couple of side dishes: one was eggplant rounds, anther was a caramelized turnip side…so tasty! 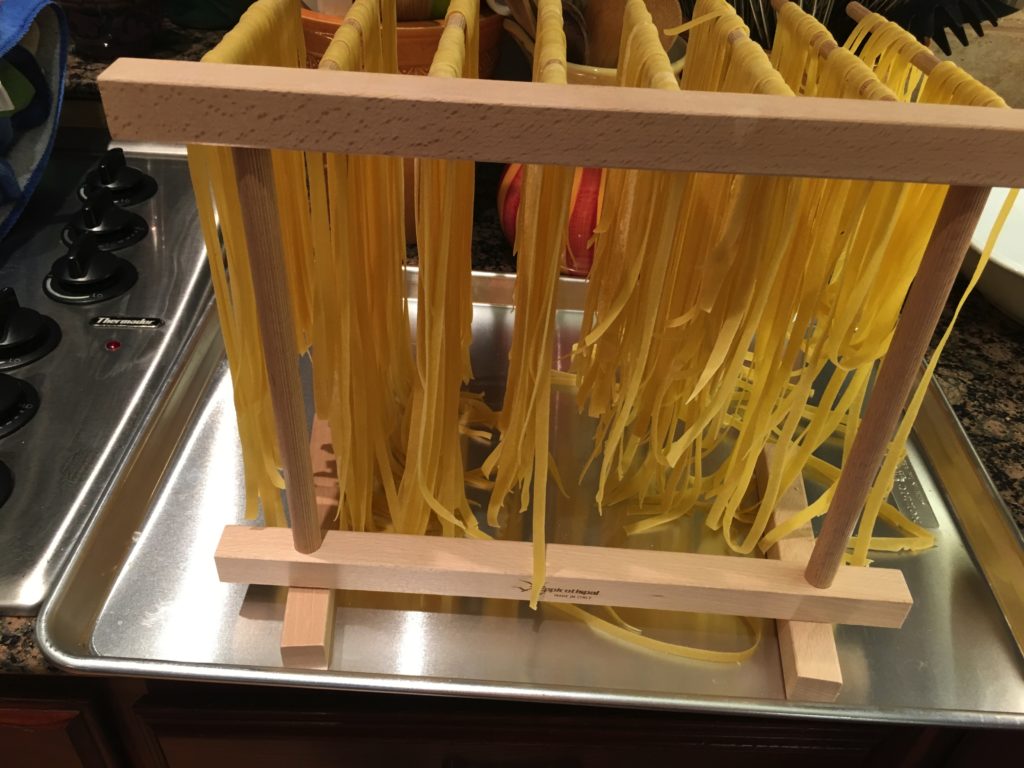 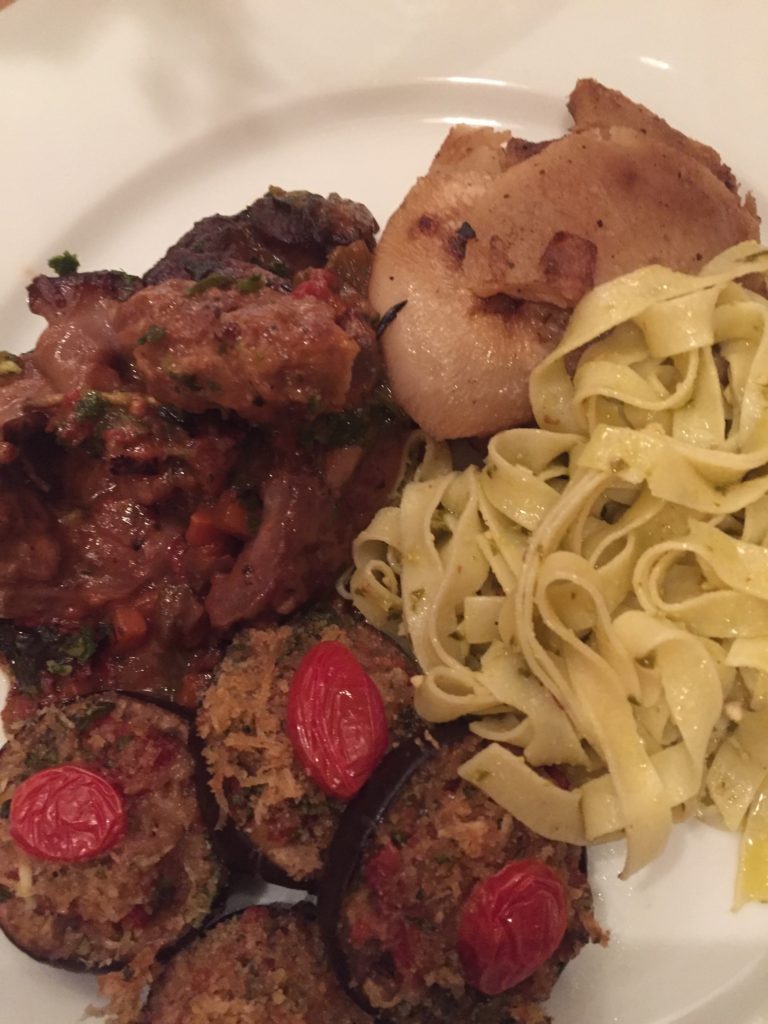 Did I mention dessert? Ah, yes, dolce, as in “la dolce vita”…”the sweet life.” It is always good to save room for dessert.

Last December (2015), my husband and I renewed our wedding vows in Italy for our 25th anniversary. We did this in one of the churches in the town his Italian family still resides in today. They arranged a multi-course feast after the ceremony at one of the local restaurants within the walls of town. For dessert we had a typical Italian millefoglie served at weddings all over Italy. 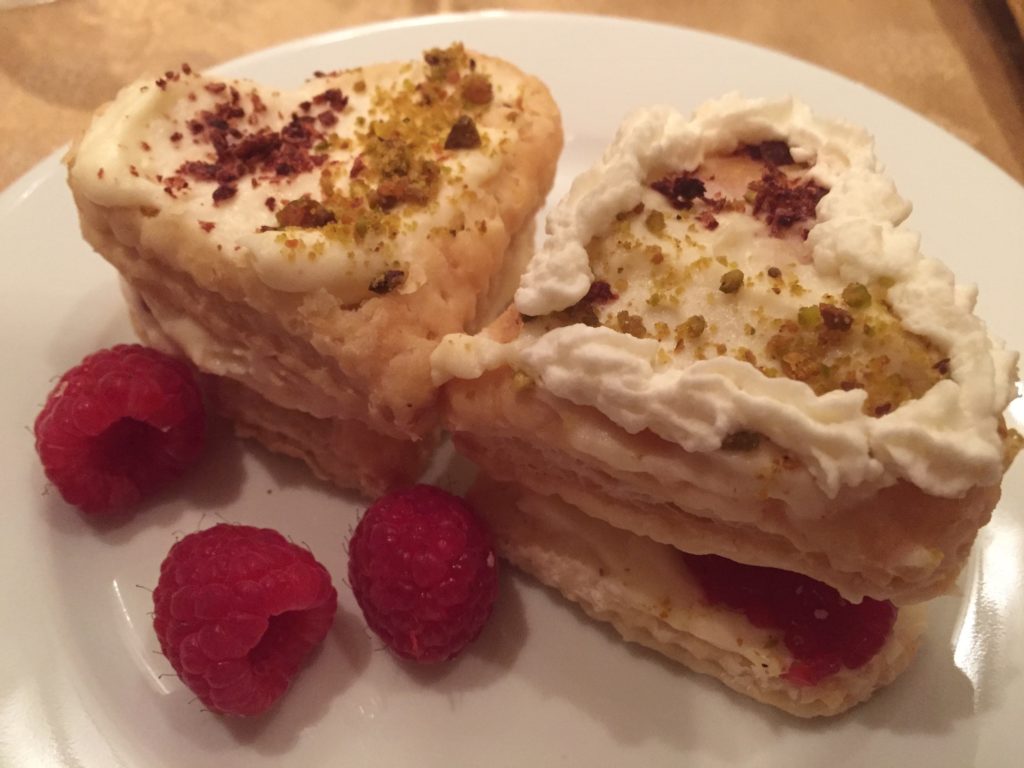 I decided to do a version of that cake for our guests. I began with a store-bought puff pastry. I found a butter based version at my local Whole Foods which worked perfectly. In lieu of one large cake, I decided to make individual cakes. I used cookie cutters to cut out heart-shaped crusts for the layers, then I baked them in the oven.

The cake has pastry cream layered with the puff pastry, so while the pastry was in the oven I whipped up a batch and set it aside to cool. Once cooled, I lightened it with whipped cream…it was now ready to use.

The last step was putting it all together. Since this was a scaled down version, I used two layers of puff pastry rather than the three I had originally planned. I layered with the pastry first, then the cream, I added raspberries on top of the cream, then topped it with the second piece of puff pastry. This received one more layer of pastry cream, then I dusted half of the heart with ground pistachios, the other half with ground dried raspberries. It made a beautiful presentation…and tasted just like I remembered! 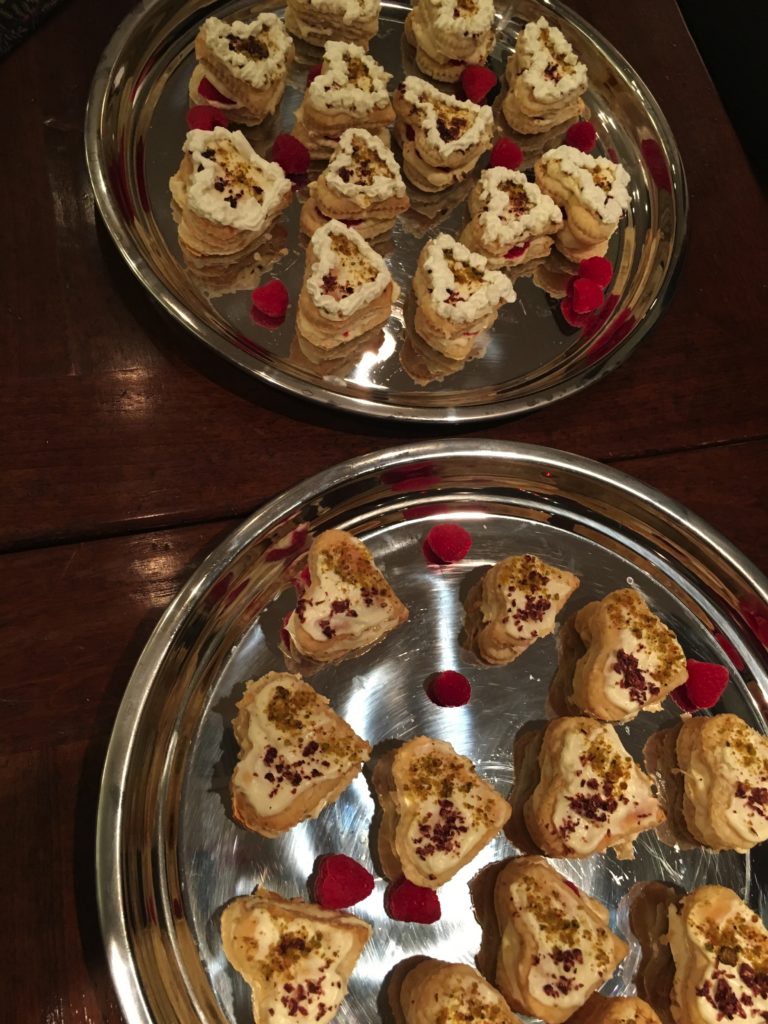 And below is the cake we had for our renewal celebration… 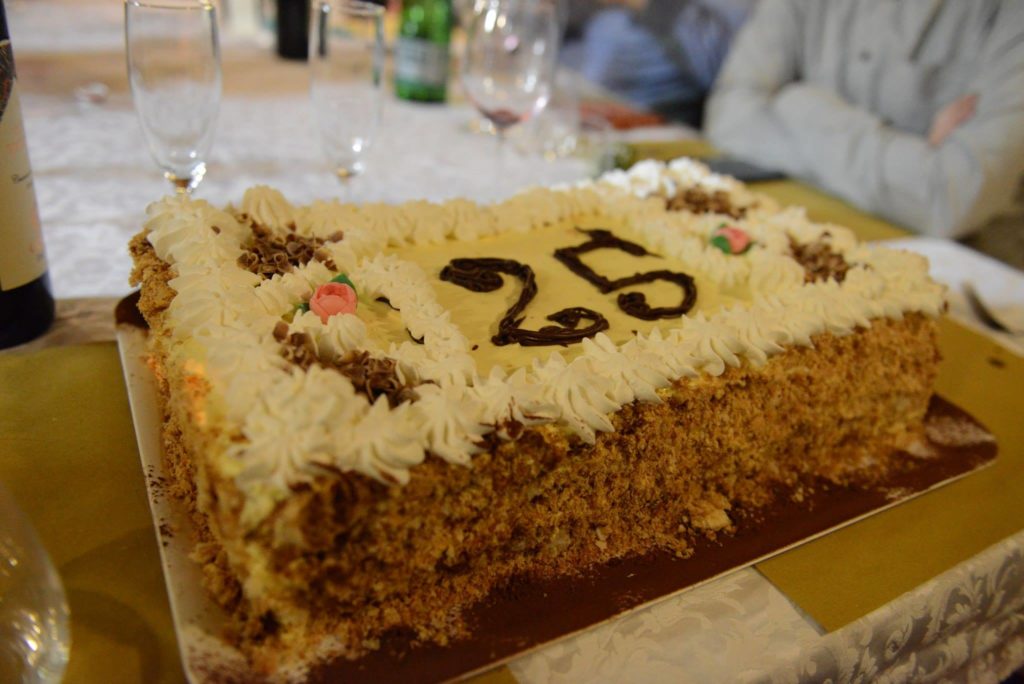 I think I did a pretty decent rendition! I did not have baked crumbs to add to the sides, and they were too small to do a proper whipped cream edging (I tried; the first half I piped using a small tip…didn’t look as nice as leaving it plain).